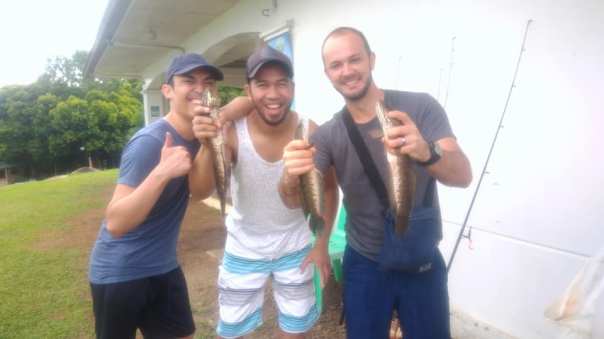 Lake Caliraya is most well known for its Largemouth Bass, but it also is home to many other species including the Striped Snakehead.  Last week some friends and I took a little road trip out there for some fishing and though we were unsuccessful in landing any bass, we did manage to land three decent sized snakeheads.  All three were caught on texas rigged curly tail worms that were a red/violet color.

It was interesting to note that all three fish were caught over a 30 minute period while fishing at sunrise.  We had fished a couple hours the previous afternoon with no luck.  The bite was on however the next morning.

We also noticed another fisherman there at the lake who had landed a large Knifefish.  It was my first time to see a knife fish in Caliraya, but apparently they had made their way into that lake and are already established.

Aeds Gudgeon on a lure.

This is a fish of the genus Eleotris which are known as Sleepers or Gudgeons. Similar to Gobies and Snakeheads, Sleepers often sit motionless on the riverbed waiting for prey to pass by.  They a generally quite small and of little value to sport fishermen however they can grow to impressive sizes of over 1 ft in length.  Anglers are most likely to encounter these fish when fishing in rivers and estuaries with bait or small lures.

Because of the diversity within this genus of fish we have simply listed the genus.

Note the thick body of the Gudgeon

Here is a Black Snakehead caught in Taal Lake by Buboy.  This species is quite rare here in the Philippines compared to its cousin the Striped Snakehead.  It can be differentiated from its cousin by the lack of a white underbelly.  The Black Snakehead can be found throughout South East Asia from Thailand over to the Philippines and Malaysia.  This species is reported to grow up to 30 cm.   This fish was caught on a medium running crank bait. 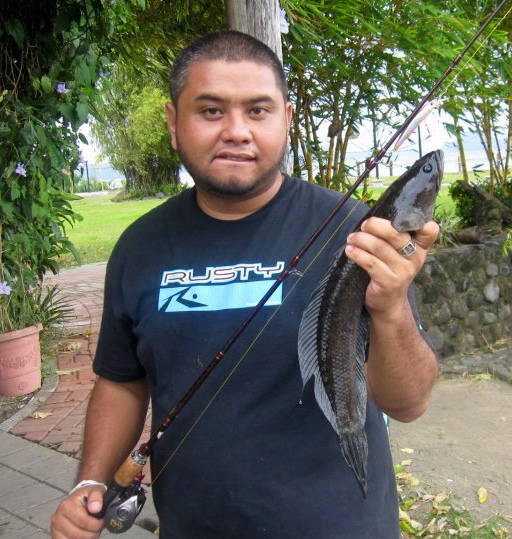 Below is a picture of the fish’s mouth:

This is the largest species of Snakehead which has been imported via the aquarium trade to the Philippines from the Thai Peninsula. The Giant Snakehead or Toman is know to grow up to 1 meter in length and almost 20 kilos in weight.  These fish have been released into various lakes, ponds and waterways here in the Philippines as a gamefish and are thriving.  They are fished for with spinnerbaits, frogs, crank baits and more.  The main destinations for these fish are Lakeshore, a small lake in Mexico, Pampanga and also the Aulo Dam near Cabanatuan City in Nueva Ecija.  These fish can also be found in various other ponds and bodies of water around the country.

Here is another photo of Sonny with a nice 1kg Toman caught in a pond in Laguna: 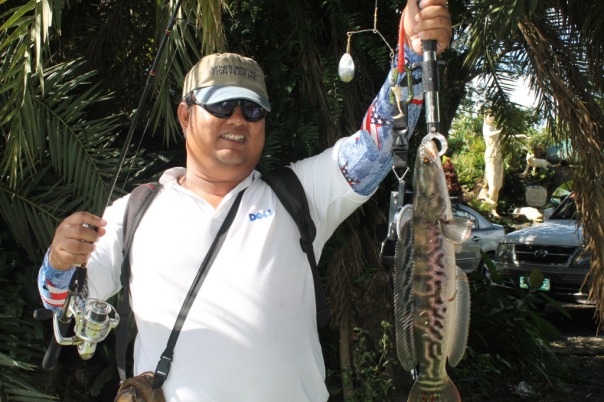 Our Artist’s Drawing of the Striped Snakehead

This is one of the more prevelent gamefish in the Philippines.  I have caught them in lakes Caliraya and Sampaloc, but I have seen them in almost every lake, river and pond I have been to.  Fish for them as you would bass.  I have caught them on bass worms, live minnows.  I have seen them caught on crankbaits, spinners, spinnerbaits, frogs, and more.  In Tagalog they are called Dalag. The one in the picture above was caught by Sonny on a Spinnerbait in Lake Caliraya and weighed 1.7kgs.